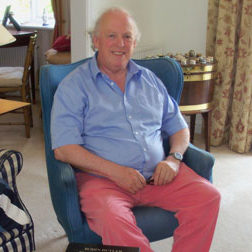 A conversation between Robin Butler and project lead Mark Westgarth.

Robin was born into the antiques trade, the son of another well-known dealer G. Noel Butler, who began trading in Honiton, Devon in 1936. Robin and his brother Roderick, also an antique dealer, opened their own shops in Devon in the early 1960s, before Robin moved his business to Bristol in 1981.

Robin developed a specialism, selling wine-related antiques, which he cultivated in the late 1970s with an exhibition of wine-related antiques at his shop in Honiton as part of the British Antique Dealers’ Association 60th anniversary celebrations. Our interview with Robin also includes reflections on dealing in the 1960s and 1970s, Robin’s memories of some of the major Country House auction sales in the same period, including the famous Mentmore sale of 1978. Robin was also a successful author, with books on English Furniture and a major catalogue of a private collection of silver.

We are deeply saddened to say that Robin sadly passed away in August 2021.  Our sincere condolences to his family and friends.